Music and lyrics by Vij Sodera

There’s a group in the water
Feeding with a bubble net
A mother and her baby swimming side by side
Silhouette high above
Turns to survey the ground
Blur of colour flashes by…
It is just an arc, it is just an arc

Two brothers side by side
Nothing can separate
Big sister gives a warm embrace
Loving eyes see her face
Tiny hand touches mine
Child is born and adored
A tear in your eye
It’s just an arc, it’s just an arc of a radius

Choloroplast and DNA
Pyruvate and TCA
H He Li Be B C N O F
ADP to ATP
Oxidative energy
All there is and you and me
You and me
It’s just an arc, it’s just an arc of a radius. 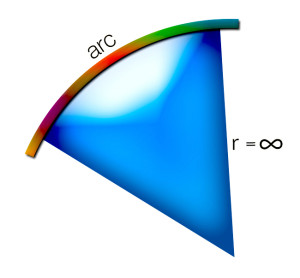 This song celebrates the glory of the created world and everything in it. The rabbi Saul (also known as Paul) declared that God can be understood to be real by anyone looking at the creation.
An arc of a circle is a small section of the perimeter. As the radius increases, the arc becomes more and more un-curved. So it is, that the mathematical definition of a straight line is an arc of a circle, the radius of which is infinity.
Since the Messiah created the world, all things are a straight line (an arc of infinite radius) pointing to the Son.
The song starts with a few lines from ‘All things bright and beautiful’, a song which is commonly sung by children. Nevertheless, the content has a deeply profound message.
I had always wanted to include the first 9 elements of the periodic table (in order of atomic number) in a song. I achieved that with the line:
H He Li Be B C N O F.
I am grateful to my chemistry teacher for that mnemonic, and also for the following line, by which the first 20 elements can be easily memorised by reciting their symbols phonetically:
NeNa Mg Al SiP SCl Ar K Ca
Incidentally, the video contains actual whale song, which just happens to be in the correct key.
The video is dedicated to my late older brother Randheir, who is greatly missed.